Are Cardiac Stents The Best Approach For Chest Pain?

One of the most common surgeries in America is the implanting of stents into the arteries of people with blockages (stents are tiny wire cages that push open a plug.) The idea here is to clear out a part of a coronary artery that is 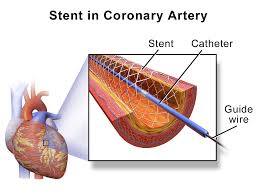 clogged and not allowing for the normal flow of blood to the heart.  Doctors have been using stents for a long time and consider it an effective treatment for chest pain and to avoid heart attacks.

No More Effective Than Pills

A new research study, however, found that stents are no more effective than medicines such as statins, aspirin, and hypertension pills.  The patients in this study did not include people having heart attacks nor those who left main cardiac artery were blocked. Rather, these were people who found out they had a blocked artery on a stress test or because of chest pain. For these people, who were no in imminent threat of death, the use of stents showed no improvement in their outcomes versus a pharmaceutical regimen.

There are excellent reasons to choose medications over stenting. One is that stenting, like any medical procedure,

Much Easier To Swallow

comes with significant risks. Another is the cost. On average, the price for getting a stent implanted is $25,000.  Even if insurance covers most of that, you could be facing a huge bill.

The doctors who make their salaries by putting in stents argue in favor of them. They suggest that patients cannot be counted on to adhere to their medical regiments. Maybe, but this is not much of an argument. A patient who will not follow medical advice is going to have a poorer outcome in every situation.

Talk To Your Doctor

As always, never make any medical decisions based on what you read here. I cannot offer any medical advice. But, before you agree to have a wire cage pushed into your artery, ask your doctor if there is a better approach.